AUDITION INFORMATION:
Auditions will be held for both singing and non-singing roles on dates listed and only one (1) slot is needed per individual. All roles are available. Reserve your Audition time slot: AUDITION SIGN-UP
– Please arrive at least 10 minutes early to check-in and prepare.
– Please bring your AUDITION FORM; filled out in advance (including scheduling conflicts). Download Audition Form

PREPARATION: Please familiarize yourself with the script and music of the show prior to auditioning. Link to Script/Libretto and the Soundtrack/All Songs is posted below in Downloads/Links section.

For Singing roles:
– Prepare 32 bars of music in the style of the show. Accompanist will be provided (no recorded music or a capella). Bring a copy of sheet music; if from a book, please bring a copy that can be laid flat and minimize page turns.
– Additional cold reading from script; sides will be provided at auditions. No monologue necessary.

For Non-Singing roles:
– No music preparation required.
– Cold reading from script; sides will be provided. No monologue necessary.

For role of NATHAN (non-singing, young person):
– Must be AT LEAST 10 years old to audition. Please read character information below.
– No music preparation required.
– Scenes from script will be read with member of production crew. Please prepare attached side(s) below. Does not need to be memorized. Nathan’s Sides are posted below in Downloads/Links.

CALLBACKS (By invitation): Will include dance/movement combination and cold reading from script. For singing roles, you may be asked to sing from the show.

**NOTE**: Some male roles in this production will ask individuals to be comfortable with their body; enough to perform on stage with limited clothing. THERE WILL BE NO FRONTAL NUDITY. Keeping in mind, the moment at the end of the show begs the question: “Will they go all the way?” Roles that include this final number are indicated by (**). Individuals will NOT be requested to remove any articles of clothing during the audition process.

Trust will be a key focus for this production; all cast will be taken care of with respect. Characters indicated (**) are not professional dancers but execution of choreography is expected.

**JERRY LUKOWSKI: (Rock Tenor; 30-40+) An unemployed mill worker, good-looking, who definitely graduated from the School of Hard Knocks, but who still wants to do the best for his son. Jerry is a complex emotional character with serious heart and charisma, and genuine tenderness for his son – a regular guy.

NATHAN LUKOWSKI: (Non-Singing role; 12 years old) Jerry and Pam’s son. “12 years old going on forty” and wise beyond his years. Stoic and sincere, but ultimately very real as he deals with his parents’ custody battle. Nathan candidates must be at least 10 years old with some acting/stage experience. PARENTS: PLEASE READ ENTIRE SCRIPT of this musical BEFORE auditions. See Downloads/Links section below for entire script and Nathan’s Sides.  Act Two Theatre intends on examining the use and/or editing of select adult language for its production, however there is mature language realistic to the working-class adults of Buffalo, NY. Parents should also be aware that the production contains male actors in limited clothing in several scenes.

PAM LUKOWSKI: (Alto/Mezzo Belt; 30-40+) Jerry’s ex-wife and Nathan’s mother; still cares enough for Jerry to want him to succeed and want him to be a good father, but practical enough to value and expect hard work

**DAVE BUKATINSKY: (Lyric Tenor; 30-45+) An unemployed steelworker. Jerry’s best friend and sidekick, he carries around a few too many extra pounds and is far too conscious of it.

GEORGIE BUKATINSKY: (High Alto/Mezzo Belt; 40-45+) Dave’s wife. Her exuberance opens the show and sets the place and mood perfectly! Hard-boiled and rough around the edges, but very committed—romantically and emotionally–to her love for her husband. Her reality comes in dealing with her hubby’s struggles and trying to hold her marriage together

**MALCOM MACGREGOR: (High Tenor; 25-40+) The night watchman at the plant, which is the perfect job for a man who has been coddled by his mother, is shy, and has few friends–possibly because he’s not being honest, even with himself.

**ETHAN GIRARD: (High Baritone/Tenor; 25-40+) An unemployed steelworker. outgoing and excitable with an infectious enthusiasm–but not the strongest intellect.

**HAROLD NICHOLS: (High Baritone/Tenor; 35-55+) Dave’s and Jerry’s former supervisor, He is a doting, prideful husband who is determined to keep his wife be-decked in upper middle-class luxury – despite of 6 months of unemployment.

VICKI NICHOLS: (High Alto/Mezzo Belt; 30-55+) Harold’s wife. Charming and energetic, she loves the finer things in life. But, not more than she loves her husband. Classy, but easily one of the girls.

**BUDDY “KENO” WALSH: (Non-singing role; 21-35+) Handsome and experienced gay male stripper. Very much the performer. Stronger dancer/mover. With his ambitions, he won’t be a Chippendale-esque performer forever. May double in other roles. Body-type: Hunky Hunk or Lean-Mean Machine.

JEANNETTE BURMEISTER: (Low Alto/Belter; 55-80+) The crusty and worldly piano player. She has show-biz running through her blood and loves to tell, and sing, her stories about it. No piano skills required. (Think Betty White with the voice of Bea Arthur.)

Show Description: Based on the hit film of the same name, The Full Monty, a ten-time Tony Award nominee, is filled with honest affection, engaging melodies and the most highly anticipated closing number of any show. While spying on their wives at a “Girls’ Night Out,” a group of unemployed steelworkers from Buffalo sees how much they enjoy watching male strippers. Jealous, out of work and feeling emasculated, the men come up with a bold and unclothed way to make some quick cash. In preparing, they find themselves extremely exposed; not merely physically but emotionally. As they conquer their fears, self-consciousness and prejudices, the men come to discover that they’re stronger as a group, and the strength that they find in each other gives them the individual courage to “let it go.” With a raucous mix of razor-sharp humor and toe-tapping pizzazz, this heartwarming, upbeat comedy is a must see. 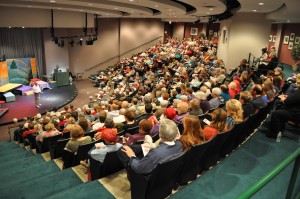 St. Peters Cultural Arts Centre
One St. Peters Centre Blvd.
St. Peters, MO 63376
The Performing Arts Theatre is in the City Hall building, Western(far right) most building at the opposite end from the Rec-Plex. Act Two Theatre performs in St. Peters to one of the largest average audiences of local St. Louis area theatre companies. Each show runs 6-8 performances with attendance numbers ranging between 1000-1800 per run. Act Two’s loyal, large and enthusiastic season ticket subscriber base allows many to receive the gift, joy and magic of live theatre that our talented actors, directors, tech crew and volunteers create.

2022 marks Act Two Theatre’s 29th season. We are proud to present another year of high-quality theatre in St. Peters, Missouri. We are located in the beautiful 318-seat Performing Arts Theater at the St. Peters City Hall Cultural Arts Centre, adjacent to the Rec-Plex. The theater has comfortable seating and a terrific stage!

Act Two Theatre performs to one of the largest average audiences as compared to other local St. Louis area theatre companies. Except for the Muny and Stages no other professional, regional or community theatre company boasts a larger following.  Act Two’s loyal, large and enthusiastic season ticket subscriber base allows many to share in the joy and magic of live theatre that our talented actors, directors, tech crew and volunteers create.